Northern Arizona Medical Corp (NAVMC) was founded in 1991 by Dr. Kelly J. Reber. NAVMC is a non-profit, 501(c) 3 corporation.  We have sent volunteer medical and surgical teams to provide medical care to areas of need throughout the world including trips to , , , , , and .  We sent our first team to in February 2012, shortly after the earthquake struck killing 300,000 people and injuring 600,000.  We have sent 8 separate teams with a total of about 150 volunteers to work at the in .  Flagstaff is the number 4 city in the world to send volunteers to work at the Medishare facility since the time of the earthquake.  Medishare is an organization affiliated with the University of Miami Medical School.  They arrived within 24 hours of the earthquake and set up a tent hospital at the airport in .  This tent facility provided medical and surgical care for 200 patients until June 2010 when Medishare moved into a previously running hospital in Port-au-Prince known as Hopital Bernard Mews.  Our last 5 teams have worked at this facility providing nursing, pediatric, emergency care and surgery for the victims of ongoing trauma in .  Most of the other hospitals in were destroyed and have not yet been raised.  Dr John Durhamis currently the Orthopedic Director of the Hospital and trying to help them build an orthopedic surgical department.  This hospital remains the main focus of our medical work presently.   We are supporting them with volunteers who pay their own way to Haiti.  We are also trying to help them develop a trauma hospital.  At present there is no trauma hospital for this city of 2 million people. 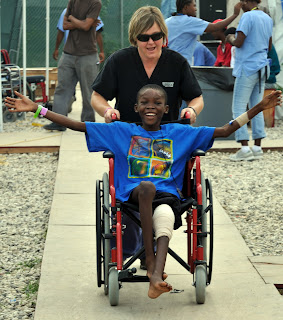 NAVMC is also supporting two orphanages in Port-au-Prince.  In May 2010 NAVMC had a fund raiser at the Orpheum in Flagstaff where we raised about $70,000.  It was our intent to spend this money on the children of as we feel that ’s hope ultimately lies in her children.  We spent a week traveling through Haiti and picked 3 orphanages that we wanted to support.  We chose them because we knew the money would be well spent.  One of these has since closed.  The other 2 are functioning well.  A portion of the money went to one orphanage to feed the children who were getting at most 1 meal a day and were all malnourished.  We fed them for 6 months, 3 meals per day.  This orphanage eventually shut down.  For another, Renmen orphanage, we purchased a 10 burner stove ( they were feeding 60 children on a single burner device), a washer/drier, a generator and a refrigerator.  For the third, New Life Orphanage, we paid for their schooling for 3 months (very expensive for 100 kids).  We continue to work with these 2 orphanages. 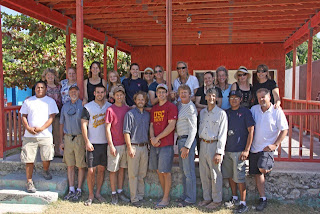 The president of NAVMC, Kelly Reber has been to Haiti several times with the medical teams.  He also spearheaded a team of 24 volunteers that in January 2012 built a school for the New Life Orphanage.  This building was financed from local Flagstaff donations and built by a group of our volunteers.  We are making plans to send down a team to rebuild a security wall for the Renmen orphanage in January 2013.  This wall collapsed in the quake and is needed to protect the 55 orphans ages 6 months to 22 years old.  A small group went down in June 2012 to prepare for this large project.  During that trip, we started a garden project and the children are now growing some of their own food.  We are also working with the older children in Renmen to develop a sponsorship program for the kids.  We hope sponsors will eventually help feed and educate each child in Renmen (for about $75 per month).  This program is being designed by the older children in the facility with our support and guidance.  We are also working with the older children in the orphanage to find graduate schools.  Some of the older children will be graduating from High school and could potentially be released out onto the streets where an unknown future awaits them.  We are trying to find graduate education programs for them and hope to be able to fund this for them.  Otherwise, their futures are bleak.  In addition, we are bringing two of these older kids to Flagstaff this summer in order to help them learn English and perhaps eventually to enroll them in Coconino Community College.  It is our goal to help them get and education that will give them gainful employment in Haiti. 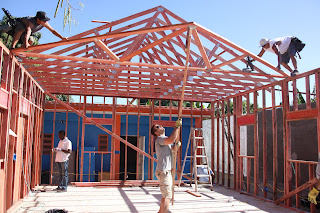 In short, Flagstaff has been in the forefront of Haitian Relief for two years and I think it is important that our town has the opportunity to know of this incredible effort.


Now that you know a bit about NAVMC, we ask you to help support them at their golf tournament Saturday, September 15 at the Flagstaff Ranch Golf Club. More information is available on their website at www.navmc.org as well as in the flyer posted below! 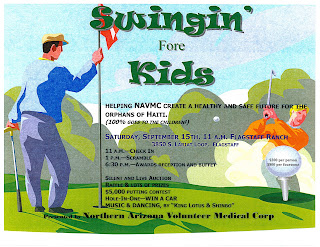