Arizona Ranked Among Top 10 for Starting a Business


Arizona is a strong performer in the innovation and entrepreneurship category, ranking 8th overall. Arizona has the 5th-highest business creation rate in the nation, but it makes the top 10 on the basis of its solid all-around performance. It ranks at least 15th in five of the six entrepreneurship and innovation metrics. 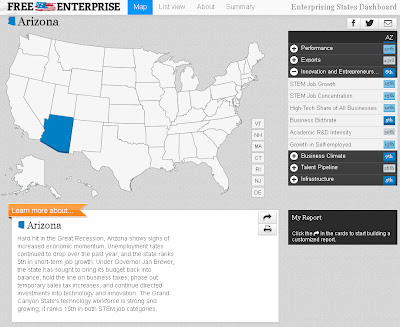 The U.S. Chamber of Commerce has released its Enterprising States report, ranking Arizona among the top ten in Best States for Starting a Business, Business Climate and Infrastructure.  We are particularly proud of the Best State for Starting a Business ranking because, as the basis for the ranking, the report calls out Arizona’s Angel Investment Tax Credit program, the ACA’s Arizona Innovation Challenge, and our AZ FAST Grant program.  This #8 ranking is a jump 39 spots from 2012, proof positive that our state’s commitment to policies and programs that support our entrepreneurs is gaining national recognition, recognition that showcases Arizona as a future-focused state committed to fostering the most promising entrepreneurs that drive wealth and job creation.
·         Read more on Entrepreneur.com: 10 Best States for Starting a Business.