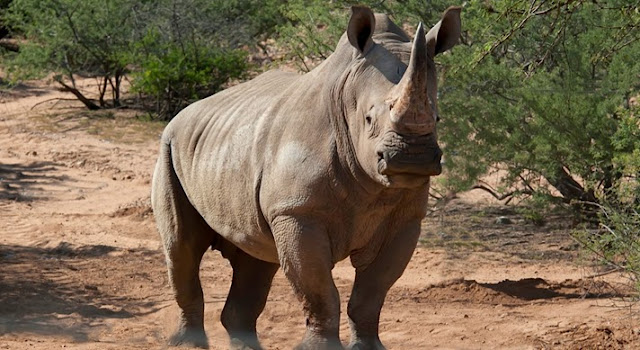 “Jericho’s arrival helps to fill a void that has existed since Boom Boom, the park’s first rhino, passed away of old age on March 22, 2012,” said Courtney Palmer, who heads the Serengeti department in charge of Jericho. Courtney spearheaded the efforts to find the southern white rhino. “It was a huge goal of ours to find a rhino to befriend and educate park visitors. After 18 months of hard work, he is finally here!”

Jericho’s heritage was unknown, so Busch Gardens was unable to continue to house him as part of their species survival plan. It is because of this that they were willing to let Jericho relocate to Out of Africa. “He comes to carry on the beloved legacy of Boom Boom,” said park owner Dean Harrison. “Jericho is adjusting nicely to his new rhino digs, and he’s available for everyone to see and enjoy.”

Jericho is currently in a quarantined section of his new habitat while being cared for by keepers, nutritionists, and veterinarians per standard procedure.  He is still visible to park visitors, but at a distance. Keepers have been providing mental and physical stimulation with a variety of enrichment tools to help Jericho acclimate to new sights, smells, and sounds.  He is being monitored to determine the appropriate time to expose him to the rest of his habitat. “We are confident Jericho will be wandering his new domain in the next day or so, but this is not something you rush,” said Lauren Nichols, assistant manager of the Serengeti department. “He’ll let us know when he’s ready.”

Park visitors will be able to see Jericho in his new habitat in time for the fall break rush.  For years to come Jericho will be an ambassador for the approximately 20,000 southern white rhinos that remain in the southern African continent today, helping to educate the public of this majestic creature that was at one time on the verge of extinction. You can learn more about Jericho on the park website.

About Out of Africa Wildlife Park

Since 1988 Out of Africa Wildlife Park has been dedicated to promoting the discovery and appreciation of wildlife for all ages; creating an experience steeped in fun, immersed in learning, and inspired by the living and colorful world of astonishing wildlife. Showcasing exotic animals from around the world, the 104-acre Park provides its visitors a unique and interactive way to see and experience beautiful creatures and their natural behavior up-close, supporting and promoting conservation awareness and action, practicing exemplary animal care, providing education and learning experiences, and establishing broad community support, through a peaceful and interactive relationship with our animal friends who touch all of our hearts.